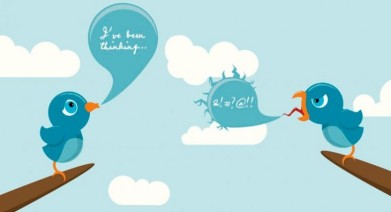 Apparently Twitter is just another means by which bullies spew vitriol at decent humans. If we know that trolling on Twitter is ever present, why do we even engage? And when we occasionally entertain the senseless Twitter battle, can we really pretend to be victims or must we admit that we have journeyed the dark path into trolling ourselves? Recently, I was accused of being a trolling robot (among other choice words) in the Twitterverse. Okay, here’s the situation…

It was not my finest moment. I’ll admit it. I was sucked in to a slightly less than intellectual debate about this fathomed concept of reverse racism (please do not make me explain the power structures that preclude this from being a real thing) and political correctness. In brief, I was responding to a commentary on the whole Bill Maher situation. I hold the belief that we all say some really inappropriate stuff from time to time—stuff we wish we had not said and would never repeat again in “mixed company”. Basically, I commented that a person should not lose her/his entire livelihood because of one dumb statement (s)he made and had the misfortune of being recorded or misquoted.

Note: this is my completely selfish way of exonerating my future bonehead self for inevitably putting my foot in my mouth AGAIN.

I went on to state that it’s not ONLY what people say (especially when spoken in jest) that define their character but the actions that back those words. The sheet hit the fan! I ended up deleting my comments because of all of the back and forth monkey poo that was being slung.

The problem that we are not addressing, but is felt by most people of color, is the unspoken ugly that buttresses oppressive systems of power and taints the characterization of people who are not in control of the narrative sculpted to describe them. We believe the things we hear and see in movies, on t.v., read in books, newspapers and hear in the news because we cannot devote our time to critically analyze every image or text we encounter. It is literally not possible, because our brains process this information largely on a subconscious level without our consent. When we see images of dark-skinned criminals, and fair-skinned victims/saviors, those images color our beliefs about ourselves and the world around us. The language we use to then describe the images reflect the subconscious acceptance of societal norms.

The problem with the “n word” is that it serves to classify a group of people as “other than human, thus deserving a lesser degree of respect and consideration. It is the implied notion of White supremacy and domination. It is the disguised veil that is used to surreptitiously divide and conquer the masses. Do I think Bill Maher is a segregationist, cross-burning, supporter of strange fruit lynching? Absolutely not. Neither are Paula Dean, Don Imus, Donald John, Charlie Sheen… etc. However, they and most of us suffer from systemic racism (as well as sexism, ageism, xenophobia and anti-LGBTQ+ values), which has brainwashed us to believe certain stereotypes about groups of people rather than taking the time and effort to know the individuals.

We are collectively outraged by someone calling a group of young women “nappy headed hos”. Do we direct the same fury at the HR manager who fails to hire a person of color because “(s)he doesn’t seem like a good fit for the team”? No. Do we direct our efforts toward stamping out the narrative that black and brown people are ignorant children who need the patriarchal assistance of a white master to raise them from impoverished inner city ghettos? Absolutely not.

The political correctness that we are all exhausted by is not an indication that we object to kind and considerate human beings. It is a symptom of people seeing through the bullshit of pretty language thrown over the reality of something truly evil festering at the core. We are exhausted by people taking offense over petty shit while the issues that are wrecking other people’s lives and livelihoods remain unchecked.
In the mid 90’s a group of friends and I went to a small town celebration in Hope Mills, NC. We watched as the KKK marched down the middle of the road to congregate at the steps of city hall. The worst part of that experience was the image of a line of police officers facing the crowds with their rifles in hand while forming a protective shield for the KKK. This is as clear a picture of systemic racism as I can paint. All of my white friends disappeared into the crowds, not knowing how to deal with the situation or possibly not wanting to make a horrible circumstance worse by offering empty words to console me and the only other black person in our group. Buuut there was that one crazy friend who was ready to throw down. I was like “Hold up. They have police with guns. You need to chill out!” Still, I was truly impressed by her teenaged bravado.

That night my other black friend and I shared our feelings of shame, disempowerment, shock and rage. But there was nothing we could do about it. They had the law and the power on their side. Instead of accepting the victim role, we began making jokes and laughing. We’ve continued to laugh about America’s racism every single time it’s called out in public. It’s like we as a nation are okay with people BEING racist or BENEFITTING from racism, you just can’t say anything that SOUNDS racist. Saying something that sounds racist in public calls attention to what disenfranchised people keep insisting is occurring, thus making it that much harder to deny its existence. When you commit this mortal sin, you must be severely punished in effigy.

That friend and I have said and laughed about some pretty horrible stuff over the last 25 years. We are each other’s safe space where we can say our most vile, dark ugliness without being judged. Why? Because we know that we are ultimately decent people with many good qualities as well as a few flaws. Sometimes you just have to say the hatefulness out loud to another person before you can unpack it to get down to the real hurt and pain that is the driving force. You quickly realize that you don’t mean those angry words. You’re just tired of walking through the mine field of political correctness that is so omnipresent that it makes you want to scream.

Instead of being politically correct, how about we strive to be genuinely decent people in an actual egalitarian society? Anyone can use pretty words. To quote my friend:

“Jeffery Dahmer SEEMED nice. How do you think he got all those people upstairs so he could eat their asses?”

The true measure of a person and a society is how they interact with people who make up their community. We need to stop being so easily offended and start sticking up for one another when our actual civil rights are threatened. If holding that opinion makes me a troll, then point me to the nearest bridge.